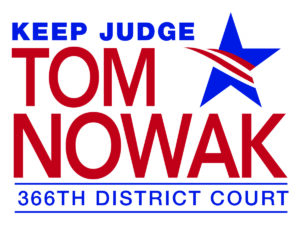 “I am honored and thankful Governor Abbott saw fit to appointment me judge of the 366th District Court, and I am ready to continue in this role. Texans deserve judges who understand the need for a fair and impartial justice system. I take with the utmost seriousness, my responsibility to uphold the rule of law. As someone who fled a communist country, where legal protections did not exist, you have my word that each day ‘I will faithfully execute the duties of the office…and will to the best of my ability preserve, protect, and defend the Constitution and laws of the United States and of this State, so help me God,’” Nowak said.

Adding to the excitement of the new campaign was the announcement that American Hero, Congressman Sam Johnson has joined the election effort by serving the Keep Tom Nowak Campaign as Treasurer.

“In my years of service to the United States, whether in the Air Force or as Congressman, I was able to work with many individuals who were committed to our freedoms as much as I am. I was excited to find such an individual here in Collin County. Judge Nowak embodies the ideals I want all our elected officials to possess. His dedication to our Constitution and rule of law is second to none. His story is one we can all be proud of. I am proud to come out of retirement to help Tom continue in his role as Judge by serving as treasurer of his campaign. I ask my fellow citizens join me in supporting Judge Tom Nowak for the 366th District Court,” said Congressman Sam Johnson.

Nowak received a Bachelor of Arts in political science and history from Texas A&M University and a Juris Doctor degree from Baylor University Law School. Prior to becoming a Texan, Nowak was born in Poland and immigrated to the United States as a refugee from communism. He lives in McKinney with his wife and two children.

Tweets by votingfortom
Go to Top